Witchlight Dragons are the Halloween breed released in 2016.

"This downy egg is hidden in brambles."

"Aww... It’s a cute baby dragon. Its eyes glitter like enchanting flames.
And look! It has grown wings! It must be close to maturing."

"Witchlight Dragons are silent, secretive beasts that haunt the most remote corners of the wilderness. They beguile their unsuspecting prey into peril by assaulting their perceptions of reality and stoking the fires of paranoia with masterfully-conjured illusions. Unwary travelers have been led astray by the soft, inviting glow of their eyes amidst a sea of encroaching darkness, never to be seen again. Those that survive a Witchlight Dragon’s psychic onslaughts do not escape unchanged: some believe that the apparitions these dragons summon to tempt or torment their victims awaken them to hidden truths about themselves." 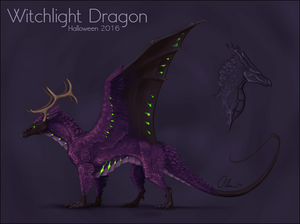 - Witchlight dragons are consummate opportunists, subsisting quite well on carrion when no fresh prey is available to them. Their strong digestive systems allow them to consume even rancid meat with confidence, and they will eat every digestible part of a kill - including the bones. Because of this, the victims of Witchlight predation have often been said to vanish into thin air.

- These nocturnal hunters have adapted to a lifestyle of stealth. The soft feathers coating their bodies muffles the sound of their movements, and they are not known to growl or roar at all. A Witchlight will huff or snap its jaws together when excited or irritated, but will otherwise remain eerily silent.

- A Witchlight dragon's illusions will tailor themselves to the unique fears and comforts of individual prey, presumably by playing off their own perceptions and weaponizing them. Some may be lured into oblivion by fantasies of warmth and safety, while others will be taunted with manifestations of their own paranoia and insecurity. Whichever form the magic takes, a Witchlight will not strike down its prey until their resolve is thoroughly broken.

- While Witchlight dragons are perfectly capable fliers, they hunt on foot and reserve flight mainly for the practical matter of traveling. The exposed leather of their wings makes too much noise in motion to be useful for stalking and ambush.

- The glow of a Witchlight's eyes and markings has an inherent alluring quality to it. They are capable of controlling the extent to which their eyes and markings glow, and use those in conjunction with their illusions to lure prey. However, they cannot control their own glow while they sleep: in order to remain hidden in their bramble-thicket nests and prevent their glow from attracting unwanted attention, they will wrap their wings tightly against their sides and tuck their heads under the sheltering darkness of their wings.

- Witchlights are solitary but not necessarily ornery. They make doting, attentive parents and will visit members of their families long after they've grown and established their own hunting grounds. Mother Witchlights will meticulously coat their newly-laid eggs with downy feathers preened from their own bodies in order to keep them warm and protected from the elements.

- It was once said by a particularly fortunate traveler that Witchlight dragons enjoy scritches, but few have dared to test that claim.

[Sub-Quote: Are these babies tall, short or medium in comparison to the average dragon? In the concept art they look a little bit short, but that's just me.]

As I told my friend while I was painting it last night... 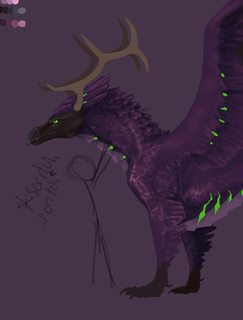