During 2011's holiday season, Dragon Cave celebrated Halloween with a new event, the "Haunted House Event". It was a text-based quest where users were to investigate everything in and around a haunted house in order to release a dragon spirit, which was bound to the house by an incantation. There were a total of 40 items and many of them were required to reach the end. Once users had managed to calm the spirit, there was a short epilogue story. After that, users were rewarded with a new haunted house badge, which can be viewed at the top of the scroll. The most difficult item to get was a rainbow chicken that could be found when users started the quest again after finishing it. You can get it if you try going back to "heavy door" (it wont let you get in) and then return out of the house to the main trail.

A map of all event areas of the haunted house plus notes on where to find all of the items can be seen here.

The event was supposed to start on the 27th of October at 0:00. Due to the server's lag from user overload, the event was delayed for 1 hour.
What would halloween be without a visit of "The Lagmonster"? Because of a small attack of the Lagmonster (10.27.2011 at 0:40), for a short amount of time, there appeared a second row of trophies on the top of a users scroll. This fueled the rumors that there would be a new trophy badge.

Sif stated that the items will be viewed either through the haunted house badge or the trick-or-treat badge (as some people may not finish, thus resulting in items but no access, and there is a separator made like the Easter's).

Since November 17th the haunted house is available again, but only for those who completed the "Haunted House Event" on Halloween. It can be accessed through the badge on the "Dragons" page or the "Account" page. Users are able to run through the event again with a fresh inventory. Any items a user collects will not actually be saved or shown to other users.

Sif sprited the badges for this event. 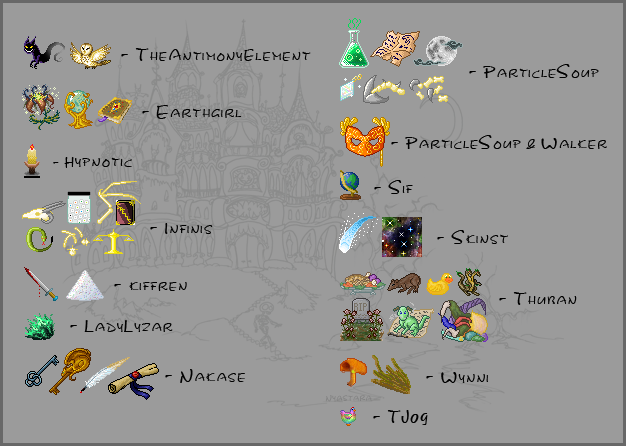 Retrieved from "https://dragcave.fandom.com/wiki/The_Haunted_House?oldid=94725"
Community content is available under CC-BY-SA unless otherwise noted.