Start a Wiki
The Dragon Encyclopedia began as an April Fools' Day prank in 2014. TJ "dressed up" as ƧockPuppet Strangler (at first he had only changed his name, then later on he also changed his avatar to the one Sock uses) and made the following announcement on the news forums:

Today, I'm excited to announce a new feature, one that's been in the works literally for years, that will help expand the world of Dragon Cave to a whole new level—the Dragon Encyclopedia. 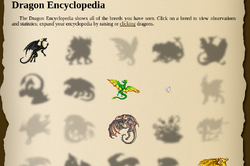 The Encyclopedia allows you to unlock “notes” about breeds—tidbits of information about their behavior, habitat, etc. These notes will appear as you raise or click on dragons (even clicks on adults are counted). The more you observe, the more you can find out! You can discover exciting context about the dragons you know and love, information that will enrich the overall Dragon Cave experience by fleshing out the world it exists in. No longer are you limited to only the four or five sentences provided in the breed description; now, you can learn things about your dragons that have never been revealed before.

The encyclopedia will be rolling out slowly; first to a small subset of users for testing (either through random selection or random drawing), then to the general public. Not all breeds will have information at first. Expect to hear more information Soon™.

There had been some speculation on the actuality of this release, as Soon™ popularly means "supposedly 'soon' but it's been said enough times for people to know better." Among other 'Easter eggs' hidden in the post is that the thread was actually posted on 12:59 AM on March 31st, 2014, implying that it was possible that it would be implemented. As of Dragon Cave's birthday in 2014, TJ09 announced that the Dragon Encyclopedia would actually be released to everyone, following a beta period that some users experienced.

The Dragon Encyclopedia can be accessed by going to Account and clicking "Dragon Encyclopedia". There, the page is divided into two sections: Lore and Breeds. The Lore section provides summaries of the world of Valkemare, Magic and the Elements. The Breeds section lists all of the breeds that the player can view and are linked on a creature's View page. It is sorted alphabetically by breed with non-dragons at the bottom, just like Breed Sort. Breeds first appear as shadows, and their encyclopedia information isn't immediately available. They must be unlocked first - by viewing, acquiring or raising creatures of that breed - before their names, sprites, and full information become visible.

Each breed's page includes information about habitat, morphology, and elemental affinity, followed by rows of sprites. Breed information is sorted into categories: Appearance/Basic Anatomy, Hatchling Behavior, Adult Behavior, Habitat and Diet. Below the textual information is a graphic and blurb indicating whether the user has fully unlocked the breed information and below that, the encyclopedia counts how many individuals the player has owned or has seen (since the encyclopedia was released, meaning those observed before that weren't counted).

As you "observe" (view via Clicks) or raise different breeds, you will get more information about each one. The amount of information a creature has in the encyclopedia varies, and the number the player has to own/observe also varies. It is usually a small number, but breeds like the Chicken require viewing of hundreds of specimens to unlock the full entry. All sprites need to be viewed separately to be unlocked. Any alternatives (alts) or variations of dragons require observing the alt or variation version of the dragon to unlock the sprite.

Retrieved from "https://dragcave.fandom.com/wiki/The_Dragon_Encyclopedia?oldid=93810"
Community content is available under CC-BY-SA unless otherwise noted.