Dohaerys, TCA
Stratos Dragons were released on March 22, 2020, alongside Crystalline Dragons. Stratoses have four different colorations that display depending on the time of day (dawn, day, dusk, and night).

This egg is very large, but light for its size.

Aww... It’s a cute baby dragon. It looks like it would be a good swimmer, but it doesn’t like being placed in water.

Aww... It’s a cute baby dragon. It looks like it would be a good swimmer, but it doesn’t like being placed in water.

And look! It has grown larger and started to fly! It must be close to maturing.

Stratos Dragons resemble sea dragons, but these massive creatures are far too buoyant to swim in the water. Instead, Stratos Dragons use air mana accumulated in their scales to live high up in the skies from the moment they mature enough to leave the ground, only ever returning to the ground in open spaces or very high elevations to lay their eggs. The underside of a Stratos is covered in reflective scales that slowly shift colors throughout the day to mirror the sky and the clouds above, serving as camouflage. Young Stratos consume anything that will fit in their mouths, and are especially drawn to air mana, but adult Stratos are difficult to observe and not much is known about what they eat or where they continue to gain mana. Corpses of grown Stratos dragons have been found with an incredible amount of crystallized light and air mana embedded in their backs, and it is thought that they fly so high up as they would otherwise be a delicacy to many of the more mana-hungry dragon breeds. 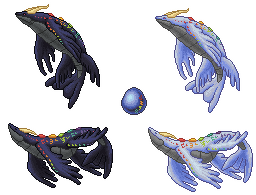 The original iteration was sketched by a now-inactive in-cave artist. As you can see, it was much more... whale-ey? It also didn't have dusk/dawn forms yet. 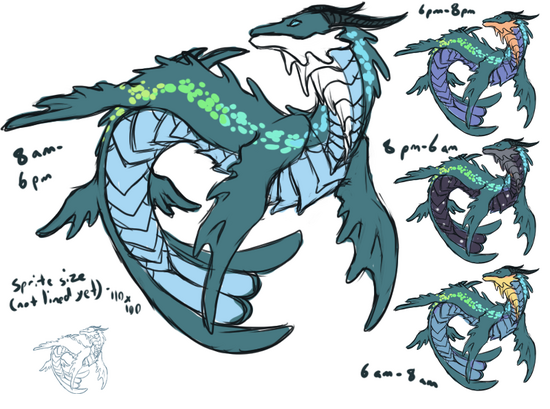 This, meanwhile, was the first sketch of the current iteration! I hadn't settled on whether I wanted to make the back teal or gray like the original's belly yet, but as you can see I eventually landed on gray. The color tints for the different time-of-day lighting was Doha's idea! I also ended up adjusting the timeframes so each color was visible for similar times, and scrapped the stars on the night coloration.