All CBs hatch as rosy-winged adults.

Solstice Dragons, or Holiday 2013 Dragons, are the all-female Holiday dragon released during the Holidays of 2013. As a limited-release dragon, they are only capable of producing more Solstice eggs during a brief period when the Holidays are celebrated in December. They can still be bred to all year round, producing the male's breed of egg. Each scroll is limited to 2 cave-born dragons of this breed, like all other Holiday dragons.

Under the legacy breed sort, these dragons sort as "Christmas 2013 Dragon" on a user's scroll. As of August 14, 2016, they sort using their Encyclopedia name of "Holiday Dragon (2013)". Blue-winged variants will sort after their rosy-winged counterparts, including hatchlings that would have grown into blue-winged adults.

Holiday dragons are a very mysterious breed. They are only seen during winter, and even then it is hard to catch a glimpse of one. They are responsible for the general cheer that spreads during the holidays. In essence, they are the “Spirits of Winter.” 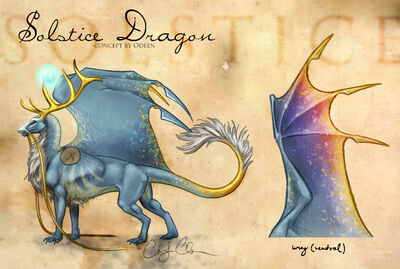 Height: 1.5m (5ft) at the withers
Length: 5m (16.5ft)
Wingspan: 6.5m (21.3ft)
Weight: 500-550kg (~1100-1200lbs)
---
Basic Anatomy: Solstice dragons' hides are soft, supple, and covered with tiny iridescent blue scales, and they give off surprising warmth in spite of their wintry appearance. Their bellies are counter-shaded with the same pale frosty color that freckles their wings and spine like snowflakes. Their whiskers help them sense wind currents and impending weather as they fly. As a Solstice dragon matures, she grows a dense mane of white fur along the underside of her neck and chest as well as a brush at the end of her tail, and some of the scales along her back and wings will turn brilliant, glittering gold. Seemingly all Solstice dragons are born with a crown of branching, antler-like golden horns which are never shed and grow very slowly throughout their lives. An orb of pure, warm light shining from the center of a Solstice dragon’s crown marks her transition into adulthood.
---
Behavior: Solstice dragons prefer to live alone or in small, tightly knit sororities of 2-5 individuals. They vocalize little, communicating mainly through a dragon’s innate telepathy and voicing their moods with soft crooning sounds, trills, and chuffs.

The orb of light burning between a Solstice dragon’s antlers has a calming effect upon any creature the light touches, and basking in its glow can lift one’s spirits even from the deepest depths of despair. These wise and affectionate creatures have been known on occasion to follow strangers that have gotten lost in winter storms, shielding them from the wind and curling up with them to keep them warm until the storm subsides.

For one week a year around the Winter Solstice, when the nights are longest, Solstice dragons will take to the sky at sunset and not land until dawn, their crowns shining like beacons in the darkness as they cavort among the stars. Many who look upon the spectacle find renewed hope, knowing that with the flight of the Solstice dragons the days will soon begin to lengthen and warmth and light will return to the world with the changing of the seasons.

When a Solstice dragon dies, the orb of light will come loose from her antlers and slowly disperse into the sky.
---
Habitat: Wild Solstice dragons actively seek out areas with colder climates and open skies and thus are found most easily in high mountain basins, but during winter months they will fly and mingle almost anywhere.
---
Diet: Omnivorous. Most of their diet consists of berries, tubers, and stripped tree bark, but during lean times or when preparing to breed they will scavenge from other dragons’ kills or hunt live prey for the extra protein and fat that it provides.

The original Solstice Dragon had blue wings. That was how I envisioned the breed, and the sunrise wings were only added very late in the design process on a whim and originally intended only to appear on the spriter alts. Jaz and I decided to submit both the colored and blue versions to TJ to decide which of them he wanted to release because I liked both equally; he liked both, too, so we came up with a way for both to be used.

I want to make it clear that the blue is not a "stripped down" version of the CBs. It is what the Solstice dragon was meant to look like: a wintry blue sky with creeping frost, snowflurry markings, and a crown of warm light promising an end to the cold. The CB version is not a souped-up version of the blue, either. I like both equally, or I would not have offered both.