This striped egg has a warm glow.

Aww... It’s a cute baby dragon. It tries to bite you whenever you come near.

Aww... It’s a cute baby dragon. It tries to bite you whenever you come near.

Sinii Krai Dragons are known for their love of fish and their strong personalities. They are able to travel both in the air and in the water with their unique tails. They live on the coast in groups of ten or more and are fiercely territorial. Sinii Krai Dragons are nearly impossible to tame if not obtained at an early age. Great care must be taken around them as their skin is highly poisonous after maturity. 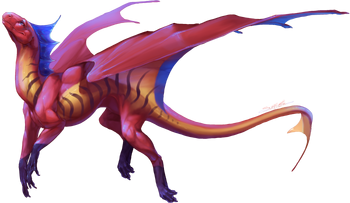 - Name: The name comes from Russian, Синий край, which literally translates to Blue Edge. It refers to the wings and I just thought it looked cool in English. I tend gravitate to less obvious names because I feel like it adds an extra element of realism - at least for me.

- Habitat: As the description mentions they live in at the coast in groups. They prefer habitats with plenty of fish available. While they can be kept in other climates they only thrive near large bodies of water. If fish migrate (like salmon for example) Sinii Krai will follow the fish.

- Diet: FISH. They will go crazy for seafood. They can be trained to eat other meats if they are taught from a young age but they will always prefer fish.

- Mating: Sinii Krai dragons mate twice a year when many groups will come together on neutral territory.

- Wild Behavior: These dragons can swim under the water for up to 10 minutes without coming up for air. They use their tail to help propel them in the water. In the wild, Sinii Krai Dragons tend to be more independent.

- Tame Behavior and keeping: It’s rare that someone will actually keep a Sinii Krai because they are frankly rather dangerous to keep. Between their temperaments and their poisonous skin they have earned a reputation that it’s better to admire from a distance. Some dragon keepers will still attempt to keep them, some even successfully. Only thrill seekers will hunt them out and try to raise them.

- Hatchling behavior: Hatchlings are little punks. Ungrateful and bity, they don’t suffer fools well. It's best to keep your distance.

- Vocal: Sinii Krai are notorious screechers. They are loud and vocal - both to each other and to others.

-  Finally: Congratulations Playdoh on getting incave! You did an awesome job helping with the female Sinii Krai.