Infinis, Shajana
Sapphire Dragons were released on March 19, 2016, alongside Antarean Dragons. On May 21, 2021, the pink and yellow variants were added to the cave as part of Dragon Cave's 15th birthday celebration.

Sapphire dragons were so named for their brilliant blue-green color, which is reminiscent of the gemstone. This breed was historically hunted for their scales; even long after, they remain distrustful of humans. Normally a Sapphire is not very aggressive, but they will defend themselves vigorously if under attack. Their diet consists mainly of fruit, with smaller portions of large insects and other invertebrates. Males woo females with vocalizations similar to bird songs. Sapphire Dragons are very loyal to their mates, and it is not unusual that they pair for life.

The addition of the pink and yellow variants introduced new variant mechanics to the game. Sapphire eggs always begin as the original blue variant. To become the pink variant, the egg must be willingly abandoned by a user. Automatic abandonment due to scroll limits does not change the Sapphire's color. To become the yellow variant, the egg or hatchling must receive a high number of views, in excess of 4,000 overall views. The exact threshold may vary. 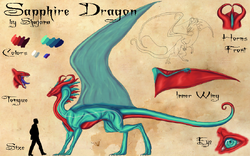 As Infinis already posted there are many lovely sapphire colors , not only the blue one. They can stand on their hind legs and walk, but only short distances. They have feathers on their head, the Sapphire Dragon is singing in the sprite pose, just like it is written in the description. They have beautiful voices similar to birds.