Under the legacy breed sort, these dragons sort as "Valentine 2014 Dragon" on a user's scroll. As of August 14, 2016, they now sort using their Encyclopedia name.

This radiant white egg has red and gold swirls on it.

Aww... It’s a cute baby dragon. Its scales are a radiant off-white color.

Aww... It’s a cute baby dragon. Its scales are a radiant off-white color.

Radiant Angel Dragons are known for their intuition—they always seem to know when someone is feeling down, and will do what they can to provide cheer. These dragons are curious and will poke their noses into anything. They communicate with one another by making sounds similar to singing. It is said that the golden feathers shed from their whiskers can rekindle lost feelings of love. 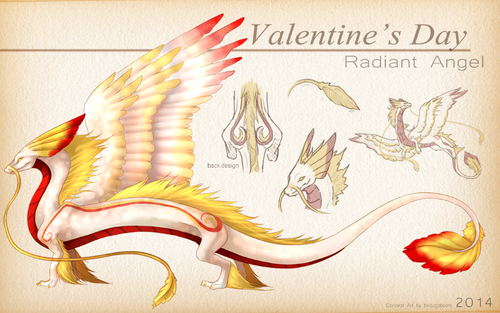 They’re rather boldly curious, willing to investigate nearly anything, which has led to many an Angel being hurt, although this fazes them little. Angels are most active between dawn and dusk.

Angels communicate with a wide range of melodic sounds, often giving off calls similar to singing. Each voice is completely unique. They respond best to love and affection. Hugging one will invariably cheer anything up.

The golden feathers that tip their whiskers are said to rekindle lost love. It is believed that the Angels infuse their feathers with magic to produce this effect.

The gold stripe along their sides is longest, extending from the third toe to the hip (while the red stripe runs from shoulder to hip); together they form a heart on the hip with seen from above. Their head feathers can be moved similarly to ears, and are used for display and communication. Angels’ tiny scales have a reflective property that causes the tinting of the scales to change subtly throughout the day and night as a form of camouflage; this is most apparent at sunset.

Thanks for all the kind words, everyone C:

Actually, Radiant Angels are *not* pink. They are slightly off-white.

'However, their scales and feathers are lustrous and reflective-- because of this, the tint on their body changes throughout the time of day.

'The colours on the sprite on-site are the colours of what the Radiant Angel would look like more around sunset/sunrise, thus the warmer/slightly pinker hues.

'Around midday, they're much whiter, and at night, they're actually a little bluer/cooler toned.

'But since there was only going to be one adult sprite, Infi and I chose the colour scheme that fit the red and gold best. C: