Pargulus Pygmies were released on May 21, 2020, as part of Dragon Cave's 14th birthday celebration. This breed has three colored variants, which are determined by biome of origin.

Like all pygmies, their eggs cannot be bitten by Vampire Dragons and they can only breed with other pygmies or Pumpkin Dragons.

This tiny egg resembles a seed.

Aww... It’s a cute baby dragon. It keeps bringing you all sorts of foraged foods.

Aww... It’s a cute baby dragon. It keeps bringing you all sorts of foraged foods.

Pargulus Pygmies can often be found tending to plants and foraging for food. They like to care for other living things, be it plant or animal, and will often leave the food from their foraging trips outside the dens of those who need it or even just those they think could use a treat. These colorful little dragons are especially attentive to anyone who might be struggling to find food themselves, such as the elderly, the sick, or the very young. Pargulus pygmies have a surprisingly large range considering their small size. They have been known to travel far and wide to find food to bring back to their friends. 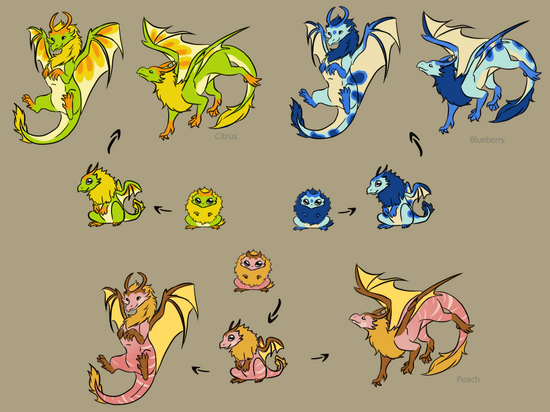 - They weren't originally going to come in multiple flavors. After testing out some palettes, I was struggling to narrow it down to one. So after asking some opinions, I narrowed it down to 3 instead.
- Their name comes from a combination of the latin words for 'little' and 'gatherer'
- Citrus trees grow well in the desert and the tropics, peaches in volcanic soil and temperate climates, and berry bushes along the coast and in valleys.
- The plural of Pargulus is Pargulus.

Retrieved from "https://dragcave.fandom.com/wiki/Pargulus_Pygmy?oldid=119424"
Community content is available under CC-BY-SA unless otherwise noted.