Before Dragon Cave had the user made sprites it has now, all the sprites came from various video games across the web. This led to some copyright issues, and TJ09 was forced to replace them with the help of various Dragon Cave fans, resulting in the Replacement Project (also knows as "The Great Fog"). Many of the replacement sprites added were heavily influenced by the previous ones, and some artists critiqued the initial replacements as having anatomy problems, most notably the initial Gold Dragons and Split hatchlings. These critiques would later lead on to the occasional sprite updates that the Cave still sees today.

Previously, all the hatchling sprites (except the Dinos, Two-Headed dragons and chickens) were recolors of the same sprite. The sprites for Yoshi were used as Dinos, which presented a major copyright infringement. The replacements continue to pay tribute to Yoshi, having a cartoon-themed art directions and keeping their shoes.

The last of these listed "original sprites" to have been updated were the Paper and Holly Dragons, due to having started out as original concepts rather than initially using copyrighted material. It is unknown when the Paper adult sprite was updated; this was done so to help bring it down to the same or similar size as other adult dragons. Holly dragons received updates to their adults and hatchlings on October 7, 2015; this was done so based on long standing critique of anatomy issues, and to help raise the standard of art presented on the site.

The image below was one of the last compiled images that included as many of the original sprites as could be recovered then. The wiki has since been able to recover a few more, although many are still incomplete. The sprites available are listed below with their corresponding original breed name (some differ to the current breed names). 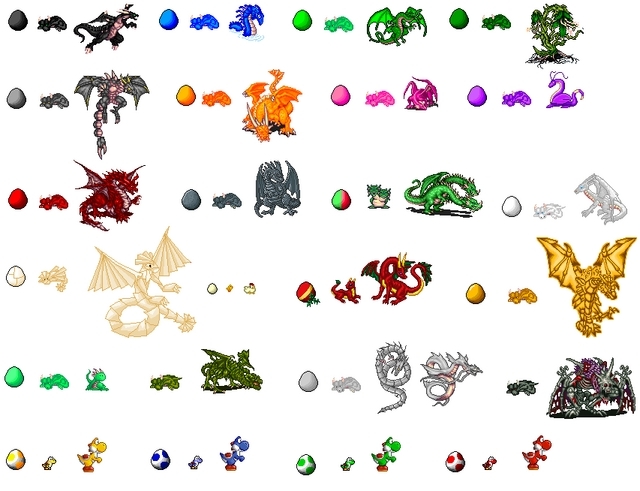 Retrieved from "https://dragcave.fandom.com/wiki/Original_Dragon_Sprites?oldid=100048"
Community content is available under CC-BY-SA unless otherwise noted.