Birdzgoboom
Nhiostrife Wyverns were released on November 30, 2013, in the "Late-November" release.

This dull purple egg has two bright stripes on it.

Aww... It’s a cute baby dragon. It already has a pair of wings, but it can’t fly very well with them.

Aww... It’s a cute baby dragon. It already has a pair of wings, but it can’t fly very well with them.

And look! It’s gotten bigger and has grown a second pair of wings, making it able to fly better than any hatchling you’ve ever seen.

Nhiostrife Wyverns are one of the few known breeds of wyvern with more than one set of wings. Because of their four wings, Nhiostrifes are very nimble in the air and control their movements with ease. When it’s mating season, males put on a very beautiful and unique air dance in an attempt to charm a female. The amount of stripes on their wings vary, with more stripes being more attractive, although most have only two to four. Their general attitude is very passive and curious—they only fight if they or their families are in danger. 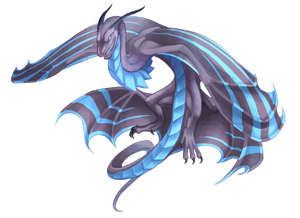 The original breed name was going to be Twister, but after the recent events in the Philippines, I decided to change the name. The sort name is still Twister though—that’s why it shows up where it does alphabetically on a person’s scroll. So either name is cool to call 'em!

Personality: Nhiostrifes are passive and curious; they only fight when they absolutely have to. There have been a number of incidents in which farmers would go into their barns only to be greeted by a Nhiostrife all curled and cramped up where the other animals (such as cows or pigs) are, not having a care in the world. Because of their curiosity they tend to cause problems innocently, such as knocking through walls or eating something they probably shouldn’t (which will end up happening far too often throughout their lifetime). If they get in a bad mood, they can get very nasty, but once they’re not angry they feel bad about their behavior and do their best to make it up to whomever they may have upset or hurt.

Habitat: Most live strictly in areas with open air (mountaintops, open fields, etc) so they don't run into things when flying. Occasionally those with better eyesight will travel out of those general areas.

Weapons: Since they lack upper arms, their back legs are very strong. One kick or swipe of a foot can easily break through tough brick walls. They also have the ability to breathe an incredibly hot blue fire, but they generally don’t use it much.

Mating: Females don’t really have to do a thing when it comes to finding a mate—it’s all up to the males. A male Nhiostrife will put up a beautiful air display that is completely unique from all others in an attempt to charm a female. If a female is charmed by the male, they will become mates for life.
More stripes → more attractive. Most Nhiostrifes only have between 2 and 4 stripes, though. Very rarely is there a Nhiostrife with completely blue wings, but if there is one, he would have the pick of nearly any female in the vicinity.

Diet/Hunting: Nhiostrifes are omnivorous. When they eat meat, they usually hunt for sheep, deer, goat, and the like. They do have a strange love for potatoes, and an owner could probably make the wyvern do some pretty amusing things for one. They also like to eat berries and oranges.
Because of their general nearsightedness, Nhiostrifes have a great sense of hearing and smell. Even if they can’t see their prey when flying, they can hear or smell them and determine where they are before swooping in and catching their meal.

Anatomy/Etc: Muscular legs with big feet. Their nails curl similar to a bird of prey’s.
They are nearsighted and have two sets of wings—one near their shoulders and the other near their back legs. As a hatchling, they only have one set of wings, making it impossible for them to fly because they cannot balance themselves in the air. If an adult Nhiostrife loses the ability to use its hind wings, it will lose the ability to fly forever unless the wings heal. This main need for a second set of wings comes from the Nhiostrife’s eyesight and a less-than-stellar sense of depth when flying. With this added set of wings, they're able to keep themselves completely stable in the air and make quick turns that may take other dragons more time to do. Being able to make sudden turns and twists helps counteract their nearsightedness.

(Quoting SockPuppet Strangler: I personally pronounce it as "neo-strife".)

Dis is the correct pronunciation. ^

It's actually pronounced "Darude - Sandstorm," but "neo-strife" is okay too.