In 2013 Dragon Cave was visited by a traveling Halloween Carnival. Users could explore the different attractions including an exhibition of biological rarities, stories and tales, a fortune teller, and games.

The medieval tent badge was made by Tikigurl91.

"Thaddeus Pumpkinstein here. Welcome to the Halloween Carnival! Prepare to be amazed by our Marvelous Marvels in the tent straight ahead. Unique dragons from all corners of the land have come to delight and astound you."

"On the far right is our Stories Booth, if you have little dragons to be entertained today."

"Challenge your puzzle solving skills at the Set Game, just this side of the Story Booth. Can you make enough sets to win the game?"

"Esmeralda the Magi is waiting in the Fortune Tellers booth to peek into the future on your behalf. Does danger or riches await you? Find out in the booth just to your left."

"If you are here today to visit the resting place of a lost loved one, don't hesitate to visit our souvenier shop, just past Esmeralda's booth. Perhaps you'll find the perfect token to lay at the tombstone."

Visit an exhibition of biological rarities from the dragon realm.

A dozing Soulpeace Dragon in the corner of the tent keeps time, tail rhythmically thumping against the ground as she furls and unfurls it. That is the only steady sound in the dimly-lit and tightly-packed tent; the other spectators eagerly discuss the wonders you are just moments from seeing, voices unpredictably rising and falling in pitch like panicked breathing. Something brushes against your leg, and you look down to see a tiny Pygmy Dragon, eyes reflecting the light of the torches all around the tent, sitting on his haunches and trying to beg food out of you. His toothy grin and flickering eyes remind you of a jack-o’-lantern.

Thump, thump, thump. Every steady beat of the Soulpeace’s tail increases the tension in the room. The Stone Dragon pushing his snout through the flap of the tent ruffles your hair with his hot, moist breath, while a Red Dragon hatchling growls impatiently beside you. You are only too glad for the Soulpeace’s presence in this tent of wonders, bursting at the seams with fearsome and friendly beasts alike, as she will chase away any curses or monsters that might try to find you on this night of All Hallows’ Eve.

Then everything but your heart finally stills as a large Balloon Dragon lumbers out in front of you, moving as sluggishly as a Nocturne who has seen the first rays of morning. The moment seems to drag on and on and on as you wait for him to make his way to the head of the audience and start the show. When he finally does, a booming voice echoes telepathically in your mind.

"Welcome, ladies, gentlemen, and everything in-between! It’s a pleasure to have you here with us on this night of Halloween! You will see wonders you have never imagined, things to make your scales crawl and itch, and expand your mind to the possibilities of the world! All you have to do is follow me into the next room!"

"Welcome to Mintie’s Story Booth. Gather round and we will hear a tale of Halloween. Do you ever wonder how Halloween came to be? Perhaps you shall learn the answer. Or perhaps you have always wondered why it is that Pumpkin Dragons live in pumpkins. We have tales to tell to good little dragons."

Show/Hide "How Paper Dragons Came To Be!" 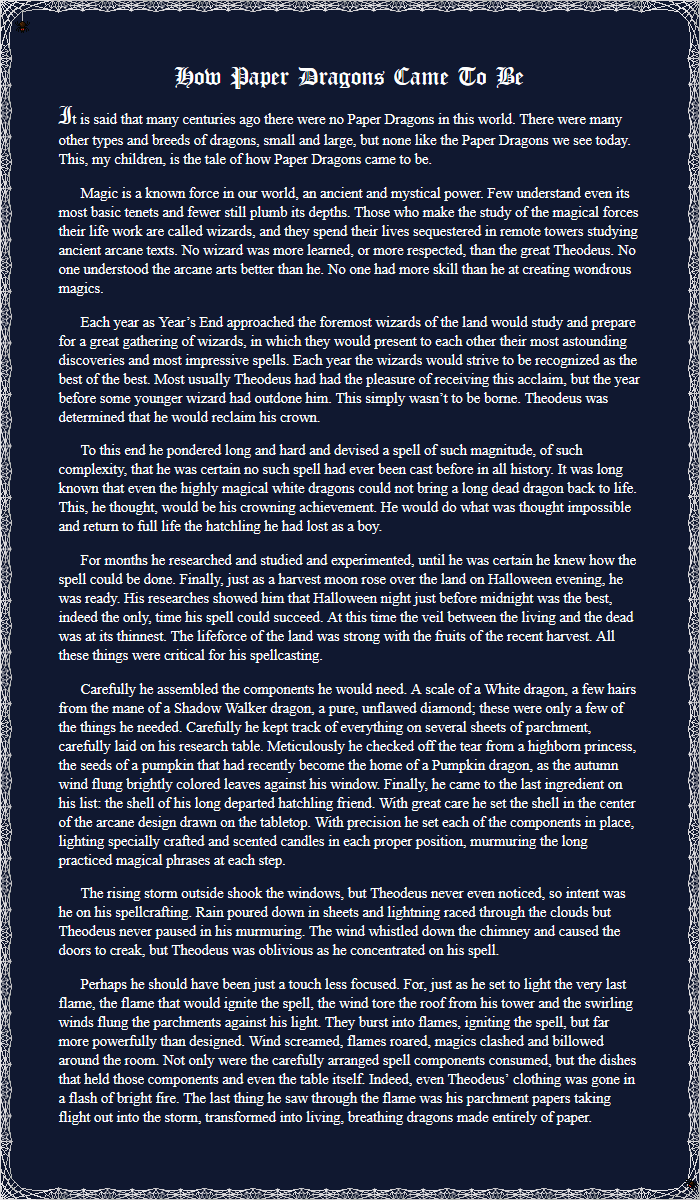 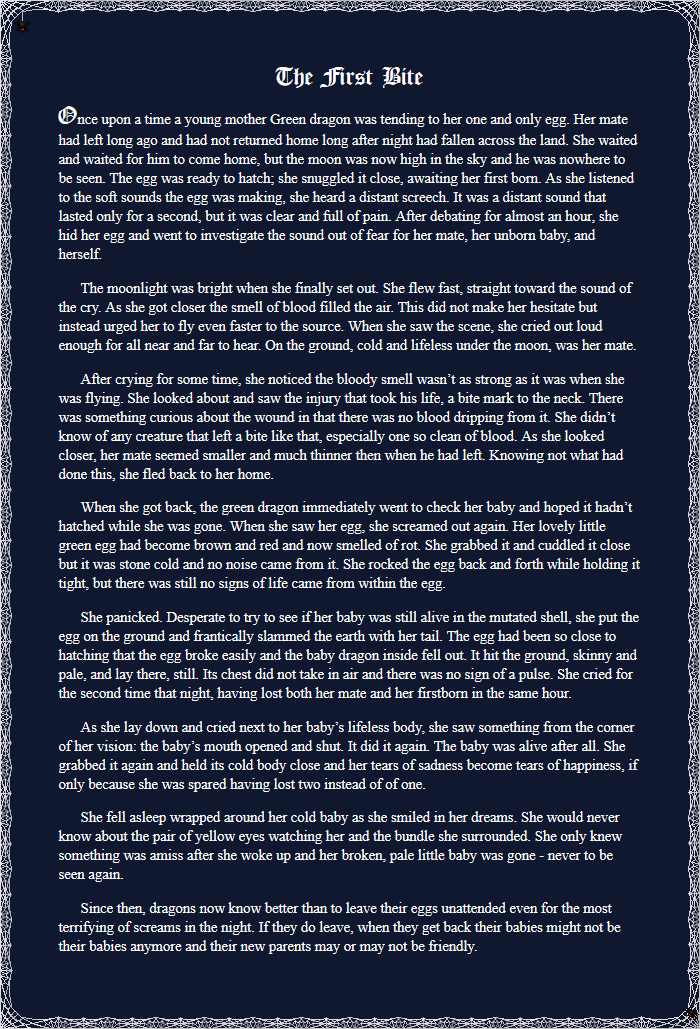 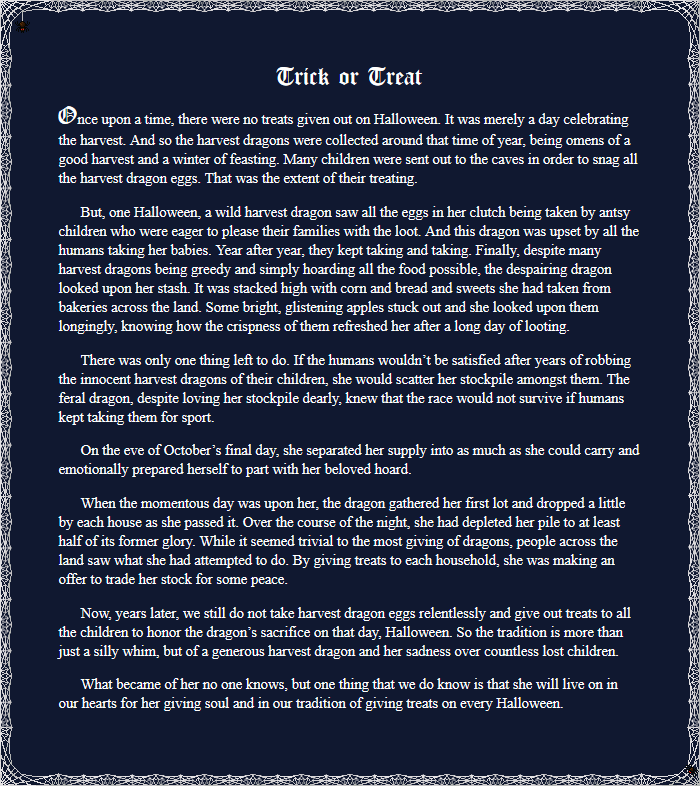 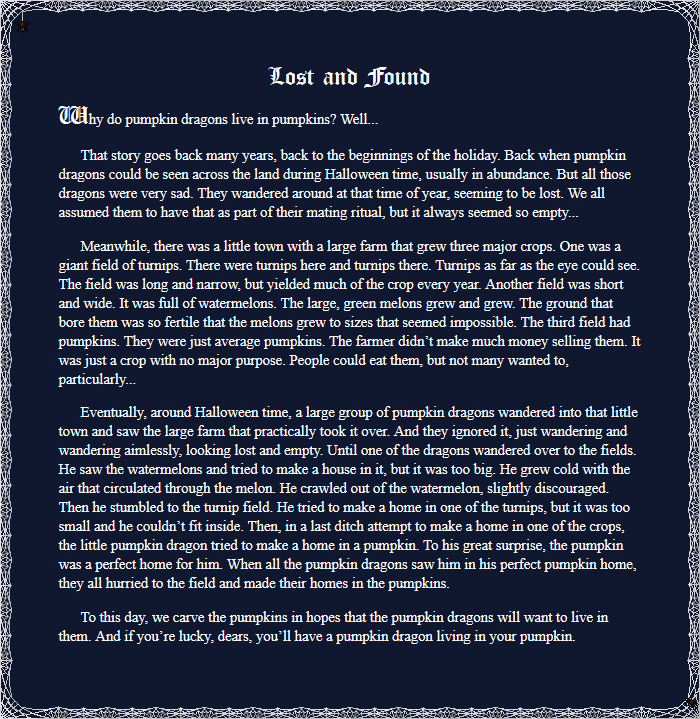 Inside the small, firelit tent, an ancient Magi sits. On her table are various curios, including a dusty and clouded crystal ball, various strange jewels, what might be some bones, and an odd stack of purple-and-black cards. You are drawn to the old cards in the stack; they are clearly old, but you have never seen such cards before, and you are curious as to what they are for.

A whispery voice speaks: "The cards are very special, you know. Old and powerful. They speak of the fortunes of those who come before me. Have you come seeking your fortunes? All you must do is draw a card."

You answer yes, and the old dragon shuffles the cards, muttering something under her breath. She fans them out in front of you, and tells you to draw one.

A purple dragon leans indolently on a green baize covered counter. He wears a green vest and a dealer’s visor shades his eyes. For some odd reason he seems a bit smarmy. "So", his voice whispers in your mind. "You’ve decided to try your hand at playing Set, have you? Well then, perhaps first I should explain the rules of the game."

"Ok, if you understand how to choose your sets, the next thing is how many sets you have to pick. See, I’ll deal out twelve cards and you have to try to make three sets of them. Just tap the cards that you choose. If you don’t think you can make three sets, I’ll just gather them all upp and shuffle them, then deal again. You can try as many deals as you want. Ready to play? Great!"

A large field of corn spreads out before you. There are paths cut through it, but the corn is taller than most men's heads. Do you dare enter the maze and attempt to navigate its treacherous paths? Who knows what awaits on the other side?

There is a path cut through the corn leading to the west and another to the east. Which way should you turn?

A map of the corn maze with directions. 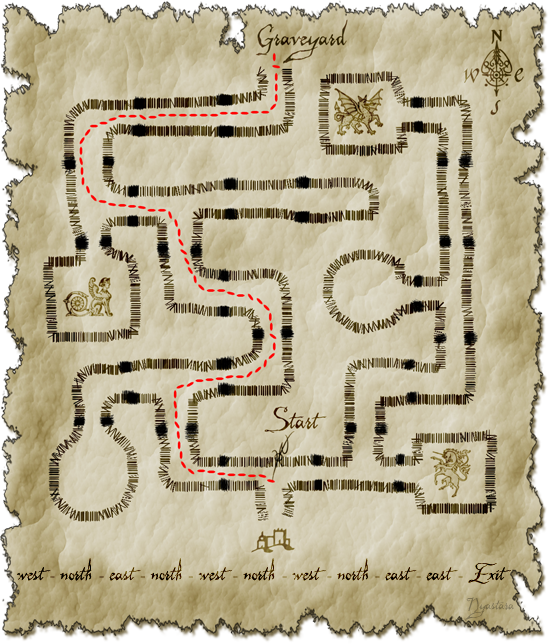 The graveyard was at the end of the corn maze. Here users could see one of three different graveyard images. Messages displayed:

1 of 3
Add photo
Retrieved from "https://dragcave.fandom.com/wiki/Halloween_Carnival?oldid=89962"
Community content is available under CC-BY-SA unless otherwise noted.