Glaucus Drakes were released on April 6, 2014, alongside the Howler Drakes. Their release was the first where TJ09 announced that he's going to try out a midday release instead of the "normal" midnight release.

Just like other DC Drakes, they can only breed with their own kind, and their eggs cannot be bitten by Vampire Dragons. Together with the Howler Drake, they were the first drakes to receive dimorphism.

"Aww... It’s a cute baby drake. It’s mostly white but has a blue stripe down its back."

"Aww... It’s a cute baby drake. It’s mostly white but has a blue stripe down its back.
And look! It has grown antlers! It must be close to maturing."

"Glaucus Drakes have curious personalities. They spend more of their time sunbathing and idly floating in the water than exploring. Because they move very little as when they float, Glaucus Drakes can ambush prey relatively easily. They can dive to surprisingly deep depths, and eat a variety of fish and marine plants. Most of them live in tight-knit family groups."

I actually didn't give the eggs that description. ovo But I don't mind it being changed. It's all cool in my book. 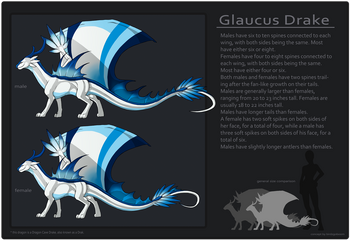