This egg glitters oddly in the light.

Gilded Bloodscale Dragons often spend hours investigating every minute detail of caves, making sure their living spaces are arranged exactly how they like. They crave intellectual stimulation and get bored easily. As such, these dragons prefer to lure in their prey using their sharp minds rather than brute strength, often engaging in battles of wits between their two heads to determine how best to proceed. Seen as eccentric by other dragons, they are often shunned by all but their own kind. 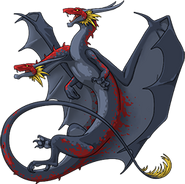 Gilded Bloodscale male adult used in the New User Tutorial.
Add a photo to this gallery
Retrieved from "https://dragcave.fandom.com/wiki/Gilded_Bloodscale_Dragon?oldid=124316"
Community content is available under CC-BY-SA unless otherwise noted.