Birdzgoboom, Dovealove, Lythiaren
Frilled Dragons, also known as Frills, were released alongside Geode Dragons on February 10, 2009. Their egg description is shared with Skywing and Horse Dragons as well as Ochredrakes, though they only share a biome with Horse Dragons. Frilled Dragons were retired from the cave on May 4, 2010, though they were reinstated on May 21, 2016 as part of Dragon Cave's 10th birthday.

In May 2014, Lythiaren had stated that she was open to the idea of re-releasing the Frilled Dragons and had stated her intention of getting them re-released pending TJ09's approval[citation needed].

This egg has strange markings on it.

Aww... It's a cute baby dragon. It has large frills on its head.

Aww... It's a cute baby dragon. It has large frills on its head.

Frilled dragons are smaller than most other breeds, but when threatened, they stretch out their wings and frills to appear larger. They generally do not like to fight and prefer hiding to confrontation. Frilled dragons live in small groups and often band together to scare off potential threats. Males also use their frills as a way to attract mates, with those displaying the "best" frills being more likely to breed.

Lythiaren has revealed that they make wonderful parents, and use their leg frills to amuse hatchlings. The males are also more decorative and colorful than the females; there was once a different male sprite planned, but this went uncompleted due to them being discontinued.[citation needed]

TJ, if/when you read this:

Please retire the Frill dragon from the cave and render all specimens infertile. There's clearly enough hate out there to make this a reasonable decision, and this is NOT the first time I've clicked on a thread and found it degenerating into people whining about how much they hate the sprite. Even fellow spriters hate the sprite.

Not anymore. See above. I will not be convinced by puppy eyes and pleading this time. The male Frill is dead. I've dealt with enough spritebashing in the past few days, and tried to tolerate more than enough on the Frill alone ever since they first started clogging the AP months ago. I will not stand for it any longer.

Speaking of frills, we found this while going through a researcher's notes. 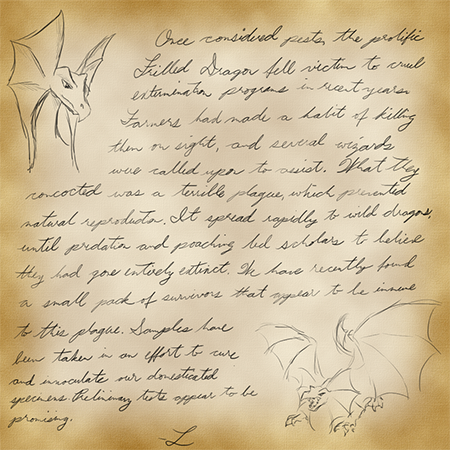 Once considered pests, the prolific Frilled Dragon fell victim to cruel extermination programs in recent years. Farmers had made a habit of killing them on sight, and several wizards were called upon to assist. What they concocted was a terrible plague, which prevented natural reproduction. It spread rapidly to wild dragons, until predation and poaching led scholars to believe they had gone entirely extinct. We have recently found a small pack of survivors that appear to be immune to this plague. Samples have been taken in an effort to cure and innoculate our domesticated specimens. Preliminary tests appear to be promising.
-L