Aww... It’s a cute baby dragon. It has an insatiable appetite.

Aww... It’s a cute baby dragon. It has an insatiable appetite.

And look! It's developed a sharp, bony crest on its snout. It must be close to maturing.

Fell Dragons are a primitive, fractious breed. They are born small but grow astonishingly quickly throughout their adolescence, and constant hunger inspires them to eat nearly anything that can be made to fit into their mouths. Legend has it that they never completely stop growing at all. Adult Fell Dragons are massive juggernauts: a diet rich in minerals and metals harvested from the earth helps them grow a dense, scaly carapace along their backs and toughens their thick hides, while their wickedly sharp claws and the bony, ax-like crest on their heads are well-suited for both hunting and physical combat. Though few Fell Dragons have crossed paths in the wild due to their primarily solitary nature, it is said that their thunderous disputes can be heard—and felt—for miles around. 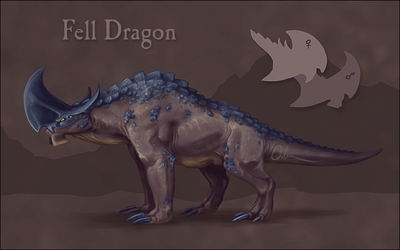 - Fell Dragons have quite inauspicious beginnings: from a dense, nearly human-sized egg, a hatchling emerges weighing less than 10 kilograms. They are born hungry, however, and grow frighteningly quickly as they feed. Within weeks, a Fell hatchling will have outgrown its egg with no signs of slowing down. Once it reaches sexual maturity after a few short years, it weighs over 10 tonnes, and will continue to grow - if more slowly - as it ages.

- In order to sustain its rampant growth, the Fell Dragon has adapted to consume just about everything: meat, plants, wood, even metal and stone. Its stomach acid is laced with death mana and perilously corrosive, capable of dissolving nearly anything it touches.

- A Fell Dragon has 2 pairs of eyes: a forward-facing primary pair and a diminished, side-facing secondary pair which expands the creature's field of vision without the need for turning its head to look around.

- Fell Dragons are believed to be a scourge upon the face of Valkemare, sowing destruction in their wake. The most ancient of their kind are called Calamities, a rare and terrifying sight to behold. Even in death these monsters are capable of rewriting the face of a landscape: once the acid within a Fell carcass eats through the decaying lining of its stomach, it spills out and carves a shallow basin around the carcass, scorching the earth of growing things. The acrid mire left behind is known as a fell pit, and naught but the hardiest and most unpalatable of vegetation will grow there for generations afterward.

- The dense hide and armored carapace of a fell dragon are inherently resistant to the effects of magic. All but the most powerful spells are simply absorbed or deflected. Open wounds, of course, are suitable weak points, but pain tends merely to enrage the beasts.

- Fell Dragons are not very bright, but if raised from the egg they can form lasting bonds with human caregivers. It goes without saying, however, that they make exceedingly poor pets.

Trivia:
- Fell Dragons are based off of aspects of several different Kaiju from Pacific Rim, namely Tresspasser, Mutavore, and Otachi. Their base physiology and behavior, however, are more inspired by the bear and rhinoceros
- The adult sprites are lovingly nicknamed Charlie and Sandra - just because.
- The Fell Dragon first came about in 2013, but I redid the sprites in 2015.