Falconiform Wyverns were released on May 3, 2014, alongside Frostbite Dragons.

"Cold flames dance across the surface of this egg."

"Aww... It’s a cute baby dragon. It is very dark in color, but its eyes glow brightly."

"Aww... It’s a cute baby dragon. It is very dark in color, but its eyes glow brightly.
And look! It has grown wings! It must be close to maturing."

"Falconiform Wyverns are normally shy creatures. However, when approached, they often feel threatened, and the flames along their bodies leap higher. Females tend to be smaller than males, though Falconiform Wyverns are typically rather large overall. They use their size to their advantage by hunting smaller dragons. The Falconiform’s graceful, swooping dives are said to resemble birds of prey. Falconiforms are largely solitary dragons that only meet in order to breed."

So since both dragons from TJ are adults now I can give you some extra Info for the Falconiform Wyvern: 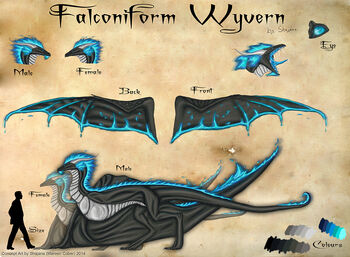 Name:
The name "Falconiform Wyvern" comes from their way to fly, the sharp hooked beak and their way to hunt, they are named after the "Falconiformes", which is an group of birds that contains the diurnal birds of prey.

Info:
They have strong legs, for an wyvern, with sharp claws, blue glowing eyes and sharp hooked beak, but be careful they have small and dangerous teeth in their mouth. Falconiform wyverns hunting smaller dragons by sight during the day or at twilight.
The wyvern can breathe blue fire, but they don`t use it often, they love the feeling to fight with their claws and their teeth against their prey.
The wings from an Falconiform Wyvern are large they can fly excellent and can make graceful, swooping dives. Their blue flames are no normal fire, it can be hot or cold, as they wish.
The Female Falconiform Wyvern is smaller than her mate, she has smaller horns and no fire "beard".

Biome:
Alpine and Volcano where the ones I requested, I prefered the Alpine but I think Volcano fit them too.

I really hope you like them (and sorry for some mistakes in my english it`s late for me here. XD)

We made the dragon completly new because we weren't able to contact Munin. Tj wanted us to work on the dragon again, because we got better over the years.

We don`t want to touch the sprites of munin without permission, so we made new ones. All the sprites you are able to see and the adults are new, except of the male s2. I made the sketches for them and sprited them together with Infinis, Munins credits are only on the S2 male. All the others are made by Infinis and myself.