Odeen
Diamondwing Dragons were released on September 25, 2016, alongside Monarch Dragons.

Aww... It’s a cute baby dragon. It is very affectionate.

Aww... It’s a cute baby dragon. It is very affectionate.

Diamondwing Dragons are named for the myriad tiny scales that grow on their wing membranes, lending them a faceted, lustrous appearance. These meticulous creatures will spend months ranging far and wide to collect the shiniest trinkets and gemstones to adorn their nests. Once his nest is complete, a male Diamondwing will perform an elaborate aerial dance hoping to impress potential mates with his beauty and prowess. 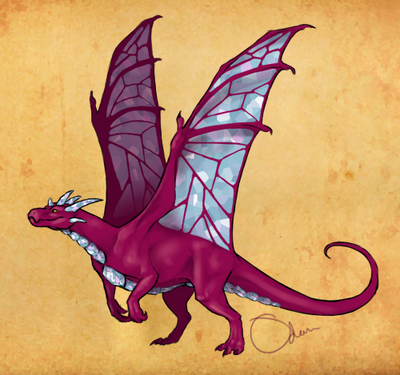 Diamondwing dragons are proud, flamboyant, affectionate creatures with temperaments as lustrous as their wings.

Males will endanger their own lives to collect the shiniest trinkets with which to decorate their dens and perfect the most impressive aerial displays, and for good reason: they are looking to attract The One, and they intend to keep that mate forever. Mated pairs will still act out the rituals of courtship annually to reaffirm their bond, but it's exceptionally rare for a pair to part ways before one is slain.

Diamondwings prefer to live in mountainous regions, and do not seem to mind heat or cold.

They're highly social and loyal to those they trust, but that trust is hard to win and easy to bruise.

Flattery will get you (almost) anywhere.

Retrieved from "https://dragcave.fandom.com/wiki/Diamondwing_Dragon?oldid=124133"
Community content is available under CC-BY-SA unless otherwise noted.