Desipis Dragons, or Halloween 2014 Dragons, are the Halloween breed released in 2014.

Under the old Breed sort, these dragons sorted as "Halloween 2014 Dragon" on a user's scroll. As of August 14, 2016, they now sort using their Encyclopedia name.

"Being near this egg makes it hard to think clearly."

"Aww... It’s a cute baby dragon. You have trouble focusing when it gets angry."

"Aww... It’s a cute baby dragon. You have trouble focusing when it gets angry.
And look! It has grown wings! It must be close to maturing."

"Desipis Dragons are an extremely dangerous breed, synonymous with the paths of desolation they leave in their wakes. These gargantuan beasts are infamous for their innate ability to control and manipulate the minds of others, which they use to pulverize the sanities of their foes and forge false memories. This power is especially effective on the foolish, and only the strongest-willed individuals have been known to resist a Desipis’s cunning. Most who anger Desipises do not live to tell the tale. Desipis Dragons are especially feared for their uncanny power of absorbing the magic of others with the fire they breathe and converting it into the bright reserves of crystallized mana that decorate their bodies." 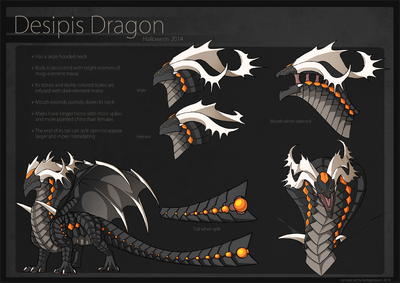 Some Characteristics:
As shown on their sprites and concept art, their mouths extend into their necks to make it easier to consume large prey, and their tails have a similar function of splitting so that they can make themselves look larger and more intimidating. The bands of muscle connecting the top and bottom parts of their mouths are incredibly strong and thick, making them hard to puncture or sever.

Desipises are known to be quite temperamental, often unleashing their wrath in bursts of their magic-draining flames. This gives them more strength and helps replenish their mana reserves, which tends to calm them down, but can harm the environments where they live. For this reason, many dragons avoid areas inhabited by Desipises.

Females tend to possess richer reserves of mana than males, providing them with more strength for performing spells and making their mental magic harder to resist. Their scales and bones are rich with their own dark mana, and they sap magic from others using their flames. This sapped mana is then processed and crystallized, creating the pure, bright crystals that develop on their tails and bodies. The amount of crystals can vary between each dragon because of this.

Their mind-breaking powers are unmatched and often fatal. However, because of their heavy reliance on magic for everything other than brute force, they are not fond of the Cassares or any other magic-deadening creatures and objects.

The name “Desipis” was chosen because of how foolish one would have to be to approach such a dangerous and twisted dragon, especially if it is untamed.

Much more info to come via the encyclopedia!

I imagine that only more experienced dragonkeepers would raise Desipises, as they are probably on the more dangerous side of things, as far as dragons go. As shown in the 2014 Halloween event, it's possible for a human to create their own nullifying field of magic, so I assume that it would be possible to weaken or stop their telepathic abilities if needed. Remember that dragons tend to trust those who raise them anyway, though, so it's likely that they'll respect their human friends' wishes and not cause too much damage. Larger breeds like the Desipis would probably be in small numbers in the 'actual' Valkemare as opposed to 'game' Valkemare, though; otherwise, the ecosystem wouldn't be able to support them. Because of that, they probably wouldn't occur in captivity very often.

Some concepts are designed to be heavily reliant on mana to fly. The Desipises, for example, were intentionally given smaller-than-usual wings and the attribute that mana is a large portion of how they fly.