On this page, information will be stored on newly-released dragons and on-going events that have incomplete data.
Information can be compiled here so that it can be retrieved at a later stage to be separated into its rightful articles.

These rules apply while the dragon is being released, till the moment when the dragons of users start to become adults. After that, the dragons' article(s) can be created.
Failing to comply with these rules will result in a warning or even a suspension (one week suspension for creating the dragon's or event's article before the dragons have grown up or before the event has ended).

On Saturday, February 14 at 0:00, a new Valentine's Day dragon will be released. It will drop for three days, ending February 17 at 0:00. In addition, the special event "Dragon Matchmaking" will begin at this time, lasting one week (it will end February 21 at 0:00).

Dragon Matchmaking: All of your shinies are going missing. What could be the source?

Aangs-sister had this comment to make regarding the color of the dragon:

There is also something else I'd like to bring up. I don't know why, but these guy's colour is extremely monitor dependent. It seems on older or lower quality screens they look pink, but on higher/newer ones they are red (I'm not entirely sure though). Stuff like that is normal for pixel art, but I've never seen it this drastic before. In other words, they are a little different to everyone depending on your computer. This wasn't intentional - but I don't dislike it and I doubt it will be changed.

On my HQ screen, as they were designed, they are red. They are a darker, cherryish red so consider that the 'canon' if you like. After some posts in the thread, I checked an older Macintosh and it was very bright pink and then a lighter red on a third computer. Seeing 'pink' isn't bad, it's just a computer difference so don't freak out.

I'm clearing this up since some people are getting lost with the colour discussion. I'm also adding this for after breeding starts so people with stripes and stuff don't get so confused.

Introduction
You throw your hands up and snarl in frustration as you pick yourself up off your knees from checking under the bed. The inkwell is nowhere to be found. This is the fifth item today to have gone missing, not to mention the stuff yesterday and no matter where you look you cannot find them. You suspect those Misfits are at it again, but no matter how hard you look you cannot find hide nor scale of them. One clue does present itself, however: a single scale from one of your own dragons sits on the window sill. You pick it up and turn it over thoughtfully. Did a sinuous neck or dexterous tail slip in the opening while you were not looking and take the missing objects. If so, why?

Snapping your hand shut over the scale you grab your cloak and bag, setting out to resolve these disappearances.

You carefully approach the cave of the dragon to whom the lost scale belongs.

“Ah-HA!” you cry out in triumph, snatching up the inkwell just inside. You lift your eyes and spy the rest of the items that had gone missing these last few days and hurry to pick them all up. An enraged roar sounds from the depths of the cavern as the dragon within lunges right at you. At the last moment it recognises you and skids to a halt, the roar changes to a pitiful whine as he sits down and bottom lip quivering looks at your stolen loot. He whines again and noses the items you now hold in your arms.

You sigh. "I should have guessed" you say to him. For sure the flowers have started blooming and birds are chirping and bees are buzzing. You juggle the items and lay a hand on the sad snout "But truly you cannot have these. I doubt a female would like them much anyway. How about I find you some really nice things for your hoard as a trade." you say.

Immediately the dragon perks up, gives you a wet tongue from waist to cowlick and struts back into his lair to await his fine treasures.

After searching around all day you finally have another box of things to take to your dragon.

Dragons who are attracting a mate seek to appeal to their potential partner by decorating their hoard with princesses, meats, jewels, or others shinies.

How you decorate your dragon’s hoard will determine what breed will appear. You may get some interested onlookers—but you won’t actually attract a mate until the end of the event. Check back each day to collect more things to decorate with.

Credits for all hoarding item sprites. 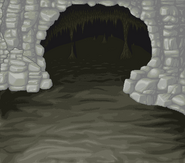 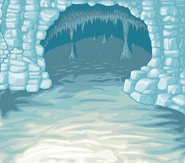 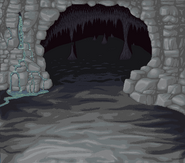 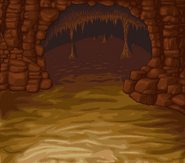 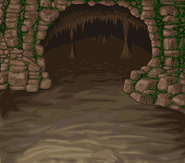 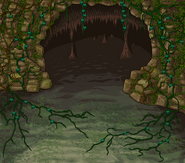 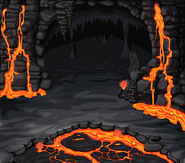 An example of a filled cave.
Add a photo to this gallery

But I have something for those who have a little bit time. We made short stories for each day from the event. But they sadly don't make sense in TJ's eyes so he don't put them in. But some of us want to share them with you so here is my little story for the event.

It was a cold morning, the sun was just rising and dipped the mountains in golden light.

Shalawyn sat at a small spring of water, which was at the entrance of her cave and looked into the sparkling water. The Falciniform Wyvern collected beautiful stones and gems and put them into the water, because she loved how they sparkled in there. A breeze came up and Shalawyn knew that it was wind which could only be caused by dragon wings. Nyramon, a green Undine dragon, landed at the entrance of her cave and he had gifts for her in his claws. He and another male, Fyvor a Pyralspite dragon, courted her favor. Shalawyn wasn't sure who should become her mate, since she really liked both dragons and even though Fyvor and Nyramon were both different, each of them was impressive in his own way.

There was a time when she was completely alone and the Falconiform lady never thought it was possible that she would have two males to choose from at one point in her life. Her kind normally lives in solitude, but deep down there was always an empty feeling and she started to feel lonely. Sure, she had a lot of fun while she was alone, but she wouldn't like to miss the time with the two males now. It was breeding season and Shalawyn finally wanted to become a mother, so there had to be a decision who she wanted as her mate, but how should she be able to decide between them? Both were gentle, came every morning with gifts for her like new stones, gems for her spring of water, food and sometimes even poems or new songs from the birds outside.

Nyramon was a bit shy and never touched her, even though she saw the longing in his eyes, he was always respectful and restrained. The Undine was always surrounded with a mysterious aura that fascinated her, maybe because he was just so unapproachable for her, but if he would finally touch her, Shalawyn would choose him. Fyvor was very self-conscious and open to her about his desire, but but he never opened himself up to her and talked about his true feelings, Nyramon on the other hand was open about his feelings. She would choose Fyvor, but only if he would open up to her.

"My beautiful lady, I found those blue gems in the mountains and they reminded me of your beautiful eyes." "Good morning Nyramon.", she greeted him, "Thank you for those beautiful gems, but I don't think my eyes are that beautiful. You can put them into the spring of water, my dear." While Nyramon was putting away the gems another breeze came up, it was Fyvor, an Almandine Pyralspite dragon, he had brought some food for all three dragons. "My dear Shalawyn, I hunted this morning and wanted to share it with you and Nyramon." "Thank you! It is really kind that you want to share it with all of us." Both males were not opposed to each other, they would accept the decision of the Falconiform female and peacefully had their meal together.

On the same day when Shalawyn flew alone over her territory, she had time to think about the males and their situation. She loved the feeling of the air around her wings and observed how the families were growing during this time of the year. When sun colored the sky slowly orange and pink the Falconiform Wyvern decided to fly home, tomorrow would be another day and maybe one of the males would finally be able to help her with the decision, if not, she would have to choose.

Shalawyn had reflected very long on their flight, but she came to the point where she had to decide, if she wanted to become a mother this year or not. She couldn't wait any longer. As she landed on the entrace of her cave she noticed that something was different, someone was there. She slowly walked in, even though her eyes got used to the darkness, she tried to taste the air to find out who was in the cave as well. There were items arranged in her cave, it also smelled fantastic and when she was finally able to see in the dark she could make out beautiful shiny stones, gold, gems, colorful scales, flowers and food, even a little plush dragon was placed next to her roost.

In the midst of this surprise sat a dragon, it was the green Undine Nyramon. He bowed and spoke in a soft voice that trembled slightly: "Shalawyn, my dear, I wanted to prepare you a joy and I hope I have succeeded. You gave me so much love in the past years, when I tried to win your heart, but I never really showed my real love for you." He stood up and came closer to the black Wyvern, she did not back down from him. She did, however, notice that he was nervous and smiled at him to try to take away his fear, he should know that he did nothing wrong. And slowly, for the first time, the Undine rubbed his face against hers.

"Finally,", Shalawyn thought, "the decision has fallen.", Nyramon was the right mate for her, as he was able to defeat his fear. There will be the right mate for Fyvor too, but it wasn't her and the Wyvern would tell him tomorrow, but firstly she would enjoy this moment.

Both dragons laid side by side and enjoyed that they had found each other.

Previous Valentine's Day dragons are able to breed and produce Holiday eggs. Go to the Abandoned Page to catch some of the former holiday eggs. The breeding period will end on February 15 at 0:00.

Retrieved from "https://dragcave.fandom.com/wiki/Currently_Being_Released?oldid=66762"
Community content is available under CC-BY-SA unless otherwise noted.