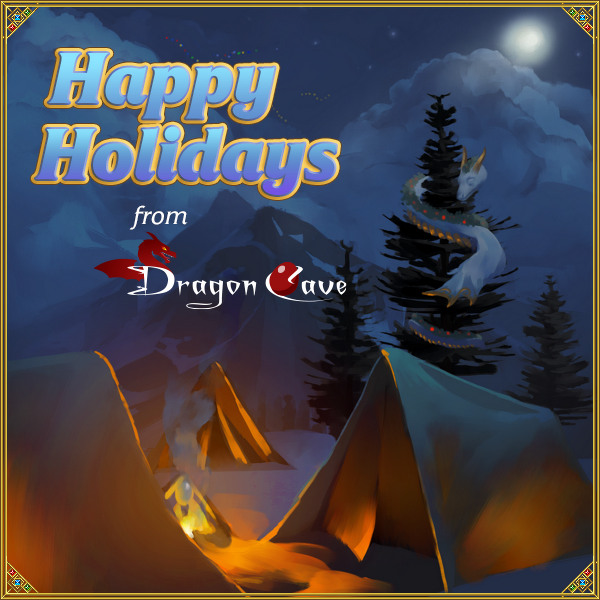 Once again, the Advent Calendar is back! Your favorite games and decorating events from years past will become available daily over the next nine days. Check out the calendar and open the doors to see what’s inside. Earn candy, and use that candy for new unlocks. And on that note—the tree decorating event has a whole host of new mana-theme decorations for you to use!

But that's not even the main attraction: The 2021 Holiday Event is Winter Conquest. Help make Snow Wars function by crafting snowballs, warming up tired participants, and delivering ammunition in new minigames. Each game contributes to your team’s daily meter and earns medals based on the standings at the end of the day; help Team Pharos, Umbra, or Magiea [sic] to win it all!

The event will be around for a full two weeks (until January 07 at 23:59 EST)—and you can open past days’ advent doors at any time—so there's plenty of opportunity to keep up if you’re busy this time of year.

A new holiday dragon is also available, starting now. It will drop all over the cave for the next three days, until December 27 at 23:59 EST. After that, they’re gone until next year.

Have fun, and Happy Holidays![1]

The Winter Conquest event opened on December 25, 2021, and will continue for 14 days. Users are assigned teams – Team Pharos, Team Umbra, or Team Mageia – upon entering the event. The event features four mini-games which users can play to earn points for their team. Daily point totals will award medals to the teams based on standing.

Running a large-scale winter-based military operation is a lot of work—even if it’s just a friendly snow fight between friends. Sourcing ammunition for cannons, trebuchets, and attack helicopters is tiring, getting those snowballs where they need to go on time takes skill, and—naturally—keeping everyone’s morale up is critical to success.

Engage in this year’s three new mini-games as well as Snow Wars 2 itself to help push your team to victory!

The Delivery Race mini-game is a SkiFree-like game. The player must navigate down the mountainside as quickly as possible to maximize their points. Collisions with trees and rocks will bring the player to a stop, costing them time. Conversly, sledding over ice patches will give the player a speed boost.

Press space to start. Use the arrow keys to maneuver around obstacles. Make it down the slope to deliver fresh ammo as fast as you can!

The Cocoa Rush mini-game is a Tapper-like game. The player must serve cocoa to incoming guests as quickly as possible, without accidentally spilling a mug.

Cheer up the tired people with warm hot chocolate! Press space to start. Use the arrow keys to move up and down, and press space to fill a mug and slide it down the row. Don’t let anyone make it to the right of the screen without being served, and don’t drop any mugs!

The Snowball Shuffle mini-game is a 2048-like game. Using the arrow keys, players can slide snowballs across the game board. When two snowballs of with the same number collide, they combine, increasing their number. This may continue as long as there is space on the board for new snowballs to appear. Once all tiles are filled, and no possible moves exist, the game ends.

Use the arrow keys to slide the tiles around. Combine two snowballs of the same size to create an even bigger snowball. Keep going as long as you can!

As part of the mini-game's inclusion in the Winter Conquest event, new decorative items have been added.

The Advent Calendar has returned for another Holiday season. As in previous years, it features nine doors which will open each day, giving access to past Holiday activities and treats.