birdzgoboom
Chrono Xenowyrms were released on June 27, 2015, alongside the Astrapi, Gaia, Mageia, Pyro and Thalassa Xenowyrms as part of the "June Release 2015".

This release was the first to introduce Wyrms into Dragon Cave.

Originating from a single species that thrived in ancient times, Xenowyrms have become an incredibly diverse breed whose appearances vary depending on their habitats. Each Xenowyrm subspecies is heavily reliant on the power of different types of mana, making them powerful magic users. Chronos are often considered to be the most elusive of all Xenowyrm subspecies: they live in the darkest and densest forests, far from civilization. They are masters of time magic, allowing them to manipulate the flow of time at will. It is said that Chrono lairs are protected by a field of magic that makes the minutes tick by at a slow pace for any unwanted visitors. 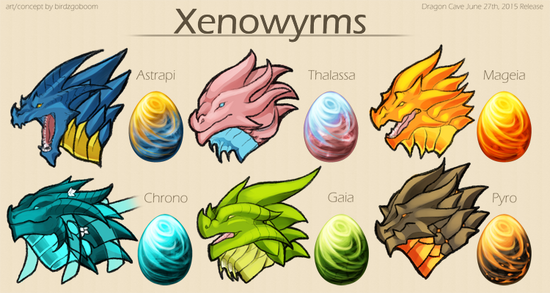 Yeaaahhh, Wyrms! And not just one, but six. Well, I guess they count as one, kind of, since they're all Xenowyrms-- ehh whatever, they're all wildly different enough from each other. SIX.

Each of their adult descriptions vary, so be sure to read those if you wanna know some neat info on each different Xenowyrm subspecies!

Retrieved from "https://dragcave.fandom.com/wiki/Chrono_Xenowyrm?oldid=124027"
Community content is available under CC-BY-SA unless otherwise noted.