When you come to the desert habitat you can see different messages according to its current status. 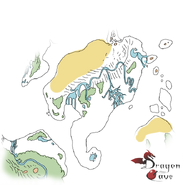 Old "Desert" area is highlighted in a yellow color.

Biome artwork of the Desert.
Add a photo to this gallery
Trending pages