Birdzgoboom
Bolt Dragons were released on July 10, 2016, alongside Storm-Rider Dragons.

Bolts are capable of using the Breed Specific Action Stun. Stun can be used on hatchlings with over 1 day left, and adds an extra day to the hatchling's "Time until death" timer. Stunning also prevents the hatchling from gaining views for 2 days, meaning the hatchling cannot become an adult while Stun is in effect. This behavior is particularly useful for conducting trades, as it allows for extra time before a hatchling matures. The view-blocking effect of the BSA wears off if the hatchling is abandoned or transferred.

This egg has a striking pattern.

And look! It has gotten bigger! It must be close to maturing.

Bolt Dragons are incredibly powerful dragons with the ability to wield lightning magic. They can be ruthless on occasion, but are generally mild unless provoked. Due to their intelligence and keen observational skills, it is incredibly arduous to attack a Bolt Dragon undetected. If threatened by a formidable opponent, Bolt Dragons will flare out their fin-like appendages to make themselves look more menacing.

Bolt Dragons display a temporary alternate sprite after using their stun action. Stunning a hatchling causes the Bolt Dragon that performed the action to change to a sprite surrounded by electric sparks. This effect remains for 14 days, until the stun action can be used again. 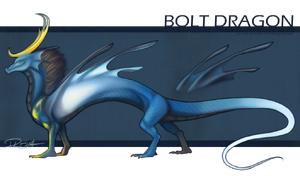 A few tidbits of basic info for them for those curious:
1. They are easterns.
2. They are Lightning element.
3. Their roars can range from piercing shrieks to a tone reminiscent to low, rumbling thunder. The younger the Bolt, the more high-pitched the roar.
4. Their scales are glassy and smooth like fish scales, and gradient from white on their sides, to blue, and back to white at the end of their tail.
5. ...???