Dohaerys
Aranoa Dragons were released on December 1, 2019, alongside Sandwaste Dragons.

The vibrant scales on this egg glisten in the sunlight.

And look! It’s grown a large fin on its back! It must close to maturing.

The amphibious Aranoas inhabit shallow brackish estuaries, rivers and lagoons. Being adept swimmers, they possess tough, vibrant scales that serve to protect the dragon from superficial physical harm, and double as a means to attract mates. Their large, cavernous maws are adapted to swallowing fish whole, and they have powerful limbs to propel them through the water. When mating, males and females will typically vie for the interest of the individual with the brightest scales and the largest dorsal fin. Due to this attraction, they are also prone to collecting shiny and colorful objects that they come across. With a diet primarily comprised of large freshwater or pelagic fish, they often hunt in groups to encircle schools of fish, making for an easier meal. While not very social, Aranoas will often inhabit areas in close proximity to each other should they require assistance in hunting, or to band together to ward off other species who pose a threat to their territory.

So Aranoas are vaguely based off of arowanas, this arowana in particular

I would imagine them to be approximately 8m long including the tail, which would mean that they are about the size of the largest saltwater crocodile ever found (with longer necks).

I would assume they love basking in the sun to show off their scales and because who doesn't like basking in the sun?
They'd lay 1-3 eggs in a clutch and guard the eggs until they hatch, at which point the parents would part ways, both with each other and with their children.
The siblings would typically grow up with each other as they'd have to stick together to survive, until they're adolescents and about 4-5 m long, where they'll split off and claim territory but still somewhat sticking together. In my mind I do not view them as sentient (I view most dragon breeds as just regular animals) so I do not think there would be a strong familial bond between parents and children (if there would even exist one at all)
Over here we have a typical image of a mating pair of Aranoas guarding their eggs and basking in the sunlight (excuse the terrible water) 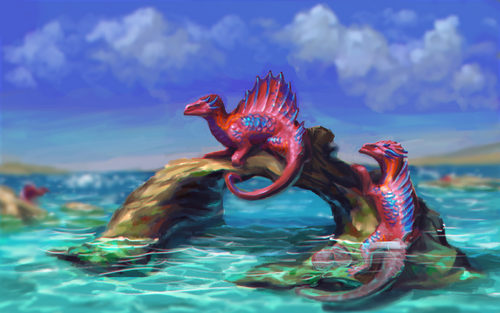 Retrieved from "https://dragcave.fandom.com/wiki/Aranoa_Dragon?oldid=123985"
Community content is available under CC-BY-SA unless otherwise noted.